WHO IS JOHN MAXWELL?

John C. Maxwell is an internationally respected leadership expert, speaker, trainer, coach and author, whose philosophy is: “Everything rises and falls on leadership.” For over 40 years, Maxwell has been teaching people to answer their call to lead, to add value and make a difference in the lives of others. He has devoted himself to developing and training leaders at all levels. Maxwell is also the founder of the John Maxwell Company and EQUIP®, a non-profit organization training leaders in 185 countries worldwide. Each year he speaks to the leaders of diverse organizations, such as Fortune 500 companies, foreign governments, the National Football League, the United States Military Academy at West Point, and the United Nations. Maxwell is a #1 New York Times best-selling author of over 77 books, with more than 24 million volumes sold in fifty languages. Maxwell became one of 25 authors named to Amazon’s 10th Anniversary Hall of Fame. Often called America’s #1 leadership authority, Maxwell was identified as the most popular leadership expert in the world by Inc. magazine in 2014. He was also voted the top leadership professional six years in a row on LeadershipGurus.net. Maxwell completed a Bachelor’s degree at Ohio Christian University in 1969, received a Master of Divinity degree at Azusa Pacific University, and a Doctor of Ministry degree at Fuller Theological Seminary. He currently resides in South Florida with his wife, Margaret.

According to Luke 6:13-16, Jesus selected “ordinary” folks with a mixture of backgrounds and personalities to be His disciples. Today, God calls “ordinary” folks together to build His Church, teach salvation’s message, and serve other out of love. Alone we may feel unqualified to serve Christ effectively, but together we can make up a group strong enough to serve God in any way.

Our facilitated virtual small groups offer a combination of masterminding, brainstorming, creative thinking, education, accountability and support in a group setting to sharpen your ministry and personal success skills. 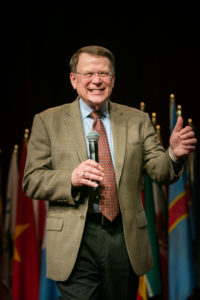 Dr. John Maxwell trained and certified Dr. Bob Louder as a coach, trainer and speaker to help you be intentional in your life both privately and professionally. Dr. Louder is equipped with the best materials and has developed the proper skill sets to work with you one-on-one, in group settings, and through workshops and seminars to visualize, create and execute a customized leadership strategy to best fit your needs. Dr. Louder is focused on providing the Financial Freedom God’s Way Online Academy Leadership Team with the best leadership and coach training programs in the world today. For a limited time this world-class training is also available to those who are not part of the Academy Leadership Team.

Please click the titles below for more specific information and schedules.

Mastermind Groups (MMGs) are relatively new to most people, even though acclaimed personal development author Napoleon Hill created the concept around 75 years ago. Here are a couple of modern definitions:

CFM Virtual MMGs allow you to work from a location you choose, as you prayerfully …

How will your CFM Virtual MMG work?

Here are 8 reasons why a Christian Financial Ministries Virtual Mastermind Group might be right for you:

The “price” is one of the best parts of CFM Virtual MMGs.

The 15 Invaluable Laws Of Growth

At Last! Financial Freedom God’s Way is available for you!

Start Right Now To “Learn It, Live It, & Lead Others To It.”